Welcome to our Support Center 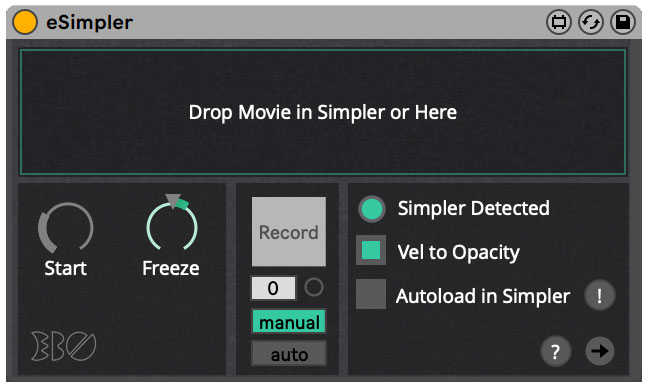 Use the eSimpler plug-in to turn Ableton’s Simpler into a video sampler. Or use it without a Simpler as a very light video sampler to keep your Live set undemanding and quick to load.

Adding an eSimpler plug-in to your Live set

Using the eSimpler in combination with the Simpler

When ‘Velocity to opacity’ is enabled, the opacity of the video will change simultaneously with the velocity of the incoming MIDI note (and therefore the sound).

Because the eSimpler relies on the default information stored in the .asd file you can not use the :2, *2 and ‘warp as’ buttons. This limitation is due to the restrained access Ableton gives to the Simpler’s parameters.

When the Simpler is set to slicing mode, the eSimpler will follow automatically.

Using another movie file in the eSimpler

Using the eSimpler without a Simpler

The eSimpler will also work without a Simpler next to it. This way you can use the eSimpler as a very light video sampler (without audio output) to keep your Live set undemanding and quick to load.

The eSimpler (and the eSampler) has the ability to record video live. When a recording is made, the video is automatically loaded into the eSimpler and ready for use immediately. A great feature to make a live performance a real live experience.

To record video with the eSimpler, at least one eVideoIn plug-in needs to be present anywhere in the Live Set.

Note: do not add the eVideoIn plug-in on the same track as the eSampler. The eVideoIn is a video source as well, so that might cause issues.

The ID on the eSimpler can be changed live with automation or a controller, so an eSimpler can record video from any eVideoIn plug-in at any point in time. The ID of the eVideoIn plug-in is taken from the position of the track in the Live Set. When the track is moved to another position in the Live Set the ID changes. The ID on the eSimpler will automatically change as well in that case.

Note: The eVideoIn plug-in creates a ‘tempRecordingFile.aiff’ file in this folder automatically. This file is necessary to make recordings instantly, so please don’t remove this file.

When the Manual/Automatic switch is set to Manual, recording is started and stopped pressing the record button manually or activating it with track automation or a controller.

When the Manual/Automation switch is set to Automatic, recording is started and stopped with the record button on the eVideoIn plug-in the eSimpler is linked to (with the ID). This way, multiple eSimplers (and eSamplers) can receive a video recorded with the same eVideoIn plug-in. 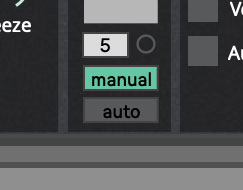 When ‘Autoload in Simpler’ is activated, the eSimpler will send the recorded video to the Simpler immediately after recording (if a Simpler is present). This makes it possible to do live sampling with Live’s Simpler!

Note: this is an ‘experimental feature’ that is not fully supported by Ableton Live. We had to come up with some creative solutions to make this work. We tested it in many user scenarios, but can not guarantee it will work in any case.